Better than Game of Thrones!

Better than Game of Thrones! 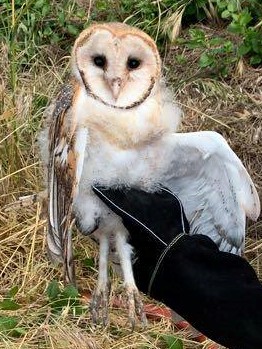 It’s Baby Season at your Rancho Coastal Humane Society’s San Diego Wildlife Center! It began with baby bunnies and squirrels. We recently told you about the orphaned baby ducks rescued from the middle of an intersection.

One of our surprises was the arrival of a Barn Owl. The man who rescued the little owlet told us that it had fallen from an Owl Box. It was skinny and really needed our help.

He came a few days back later with another little owl that had not survived. He asked if it has fallen victim to Rodenticides…..poisons used to kill rodents.

Wildlife Center Director Trish Jackman says, “It was a young, severely emaciated owl, which tells me the parents were probably killed and these juveniles were left stranded in the box starving,”

The man told us there was still another owlet in the box. We decided it was one of those rare situations when it was time to intervene. One of our staff members, Tyler, went with the man to retrieve the owl once he got the box down.

Trish says, “When she reached in, she found not one, but two starving young owls. The man was so happy, he said, ‘We made his day!’ then changed it to, “We made his year!” Then, he said, ‘No, even better……This rescue was better than Game of Thrones!’ He was so happy that 3 of the 4 could be saved!”

His wife then posted on Next Door (a private social media network for neighborhoods) and it has started getting attention and some donations to help save wildlife.

Trish says, “I spoke before the Environmental Commission for Encinitas about this very thing. He and his neighbors suspect that the parents were killed by rodenticides, which is entirely possible, since both are gone. We don’t normally go out on rescue, but we were certain that these owls were orphaned and starving.”