Movements Are Born from Moments:  The Founding of F.O.C.A.S.

Movements Are Born from Moments:  The Founding of F.O.C.A.S.

One morning in 1977, a woman was walking her two dogs in the local park like she had done every morning for over ten years, when she saw a large red dog, running, afraid to let anyone near, yet desperate to find someone. The woman was finally able to catch him and took him to the “pound” where she was greeted by an older employee with a nameplate that read “Gloria,” who had a strong Bronx accent and glasses as thick as her accent.  The woman was told in a rehearsed monotone that the dog would be held for a minimum of three days.  If identified, it would be held for five. If the dog wasn’t claimed within the allotted time, it was euthanized.  “Can’t you find someone to adopt the dog?” the woman asked. Gloria looked at her blankly.  “What’s your name, honey?” “Peggy. Peggy Howell.”  “Well, Peggy, honey, we don’t have an adoption program; not in the budget.”  The sound of barking dogs was everywhere. The barks were loud and sounded of fear. All Peggy could think about was getting out of there.

She went back to her home where her two dogs were resting on beds in the kitchen. She couldn’t stop thinking about the red dog. But she did not want to go back. She called Gloria, who happily said she’d found the owner. Gloria told her that there were a few people she could call if she came across an adoptable dog and she would sit on the dog’s card on the third day so the animal control workers wouldn’t take the dog to be euthanized.

Peggy Howell was well connected. Her husband was a doctor, she had volunteered for years in some of San Diego’s most prominent organizations. Her children were grown, and now in her early 50’s, she wanted to do more. Something clicked in that moment. She picked up the phone and called some of her friends she knew were dog lovers. Another doctor’s wife, Sue Geller, jumped at the chance to do something for dogs in the pound. They founded F.O.C.A.S. (Friends of County Animal Shelters) to adopt dogs and cats out of the County shelters, particularly those who might be deemed “unadoptable” because of age, physical disability, or a biased behavior test. They established a “foster” program, primarily for dogs, to help them adjust to a home.  Peggy and her husband, Frank, who was her chief supporter, had 13 “failed fosters!”

The early years were filled with exhilaration and successes as well as frustration and defeats.  But Peggy and Sue knew they were onto something, a movement whose time had come. The moment for animal rescue had arrived, and F.O.C.A.S. became one of the first organizations nationally; an example of how to do it, how to make it work.

Peggy never forgot the red dog in the park, for as much as she changed his trajectory that morning, he changed her life forever along with the lives of thousands of dogs, cats and their adopters. 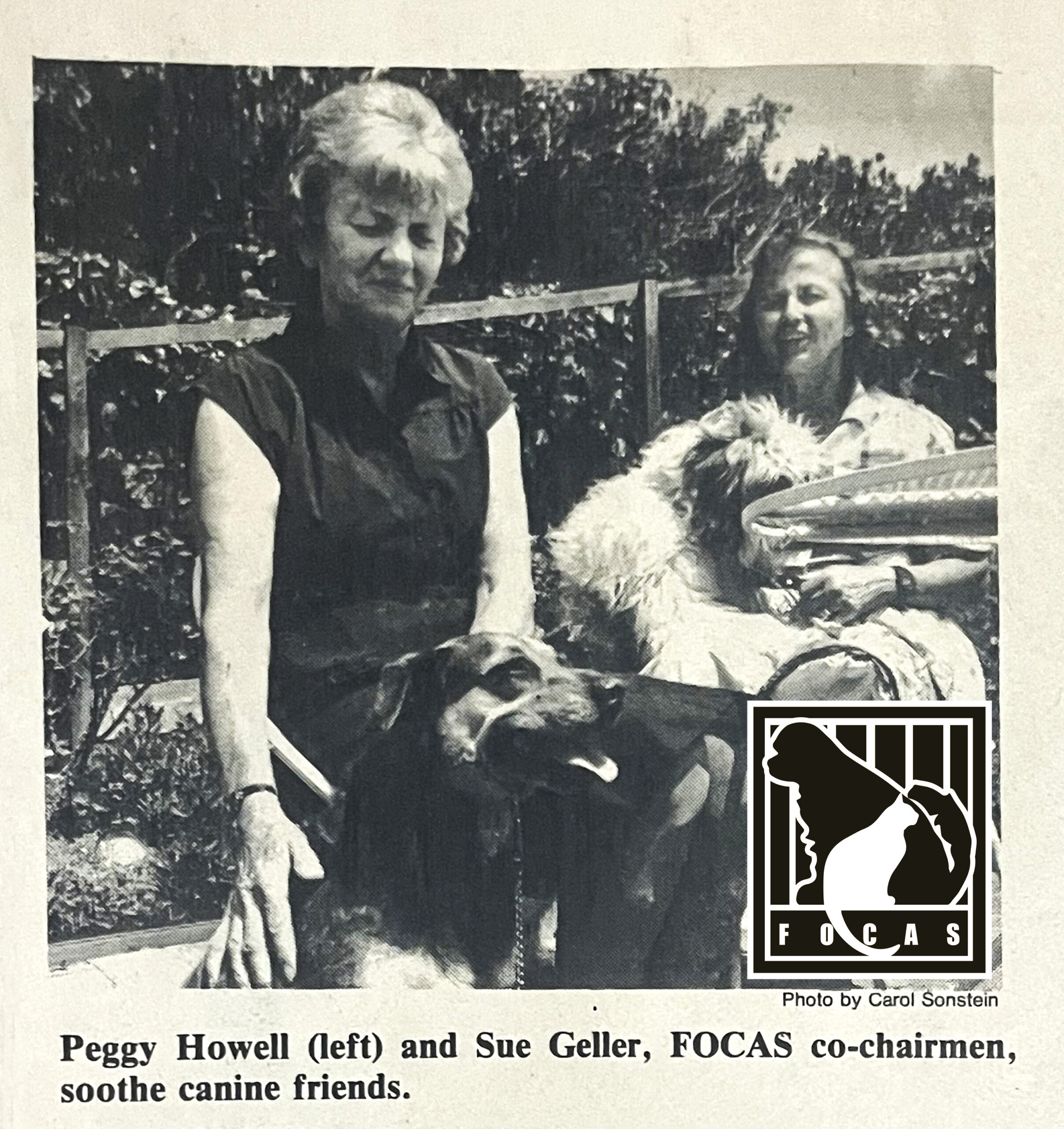