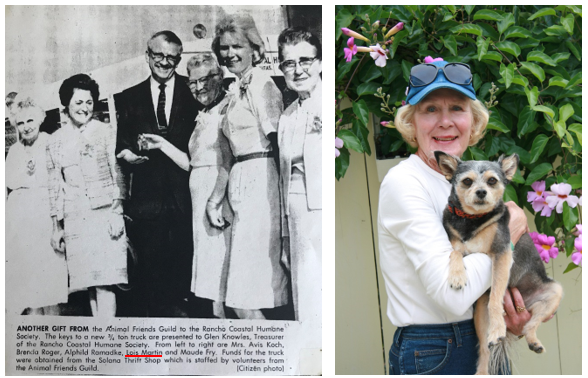 Lois Martin has volunteered at the Rancho Coastal Humane Society (RCHS) Thrift Shop since it opened a little more than 60 years ago. As we celebrate our 60th anniversary, Lois shared some of her memories with us.

Lois is the only RCHS Thrift Shop volunteer with 60 years of continual service. As far as we can tell, she is the longest continual volunteer for any nonprofit organization in San Diego. 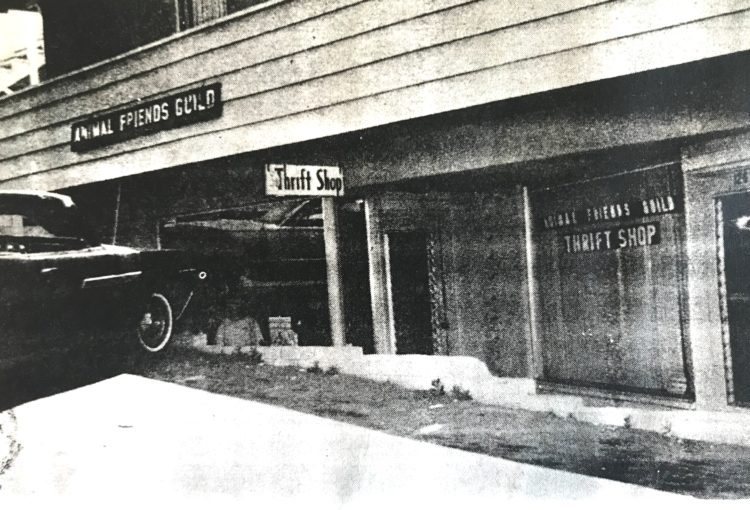 To tell Lois’ story, we must start at the beginning.

Lois says the Guild accepted donations and operated out of a shed behind Beach Hardware in Solana Beach. She says, “It was really more of a shack, but it worked.” 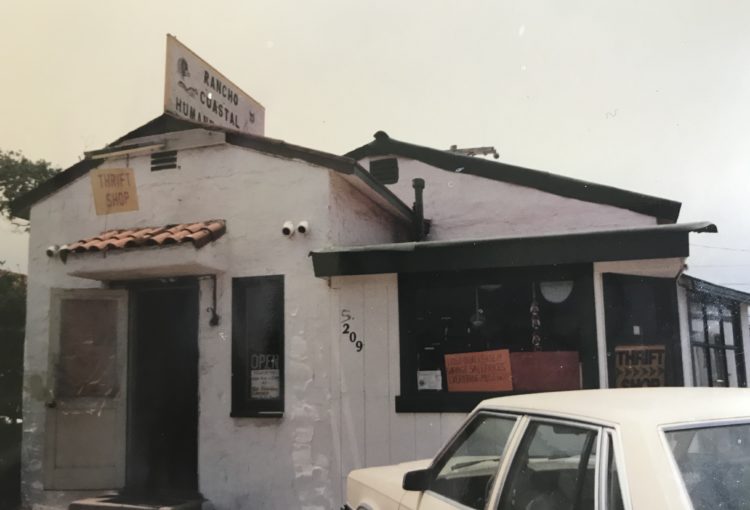 There was no cash register. Shoppers paid the volunteers who put the money in their aprons. At night the money was stored in a “safe place.” That worked until someone robbed the Thrift Shop. After that, the volunteers took each day’s receipts to the bank. Not long after, they moved to a new location.

Lois says the Guild was all-volunteer. Everyone worked together and the money went into the Animal Friends Guild bank account. When the RCHS shelter needed supplies, project funds, a new vehicle, or had other expenses, the shelter told the Guild, and the Guild paid for it.

Eventually the Guild became the RCHS Thrift Shop. Over the years, it moved a few times. Lois recalls sometimes it was when the rent went up, or another time when the location was turned into a restaurant. Each time the Thrift Shop moved, Lois moved too. 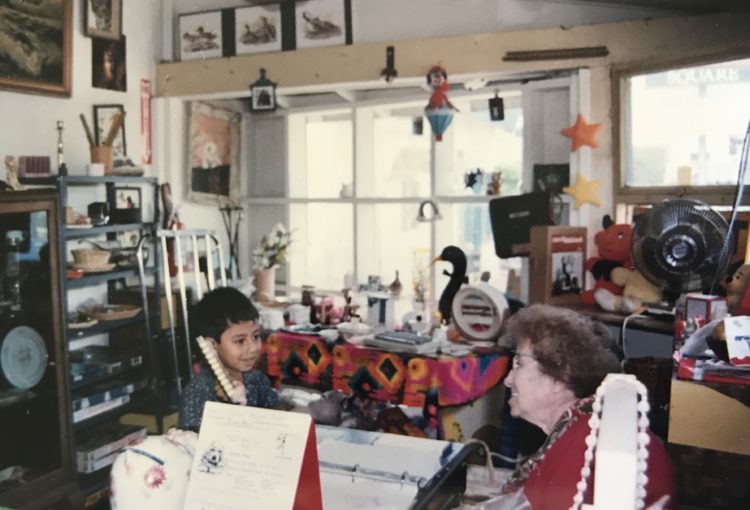 The last move came in July of 1990 when the Thrift Shop settled at 120 Aberdeen Drive in Cardiff-by-the-Sea. The Thrift Shop has expanded since then, taking over more sections of the plaza.

By 1995, there were more donors, more shoppers, and more volunteers. A member of the RCHS Board of Directors, who was also a Thrift Shop volunteer, presented the idea that it was time for the all-volunteer Thrift Shop to hire a professional manager. The first paid manager was hired soon after.

What was the worst donation Lois ever saw come in to the Thrift Shop? Lois can’t remember one particular item, but she says the volunteers often joked about items they couldn’t figure out. It made for lots of laughter. She also remembers that, during the early days, some people would take pretty much anything they didn’t want and drop it off at the Thrift Shop. She points out that some of the donations in the early days didn’t smell very good. 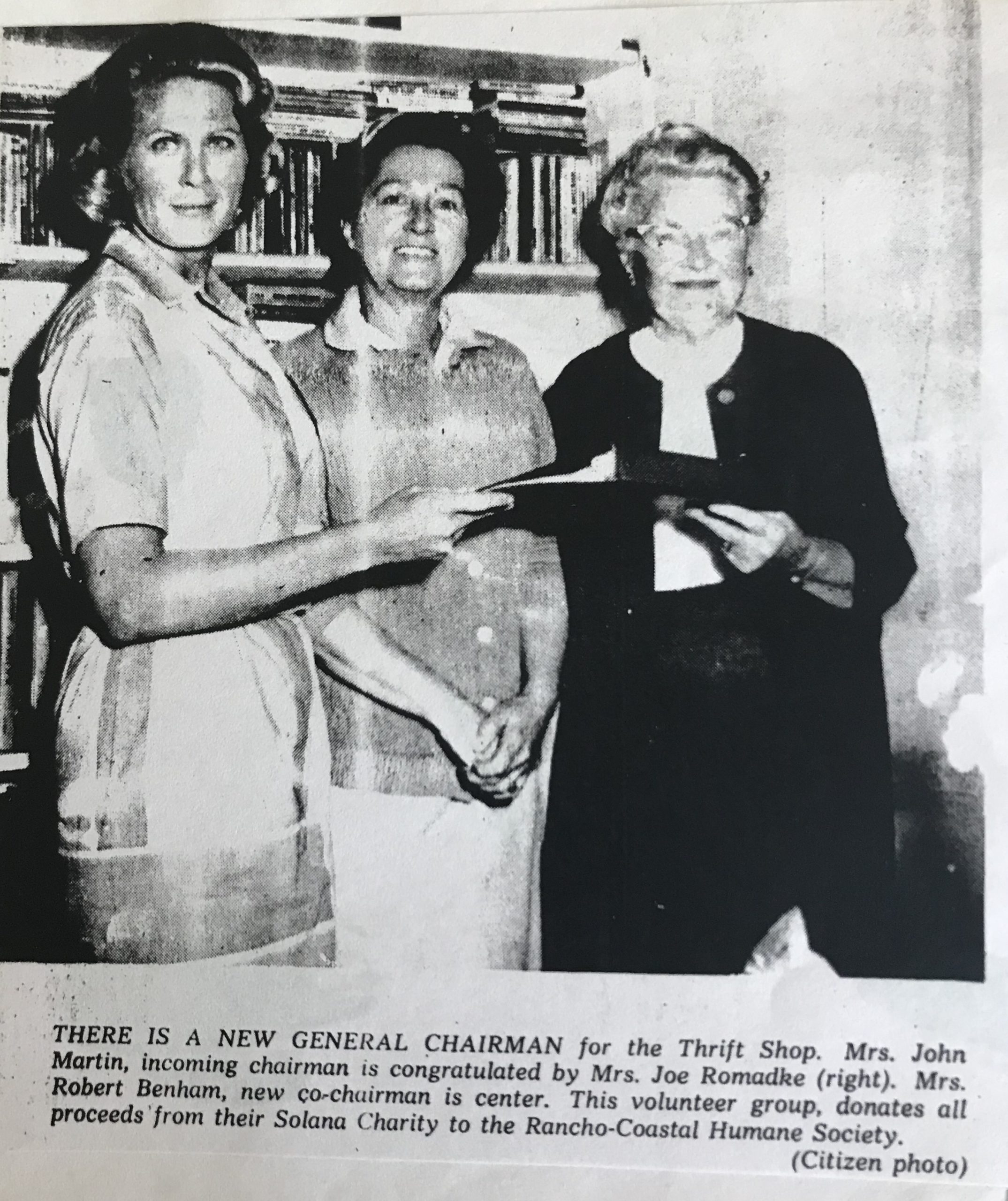 Her advice for those who are thinking about volunteer service, “Contribute. Do something for somebody else. The animals cannot speak for themselves.”

As we were winding down our conversation about Lois Martin’s first 60 years at the RCHS Thrift Shop, Lois had this advice for new Thrift Shop volunteers, “Be sure you know what you’re getting into. It’s not always easy, but it’s always rewarding.”

Thank you to Lois Martin and the hundreds of other Thrift Shop and shelter volunteers who work every day to fulfill Rancho Coastal Humane Society’s promise to rehome companion animals and help pet owners in need.  After all, Every Animal Deserves a Tomorrow®.