Back To Home
Fetch Newsletter December 10, 2019 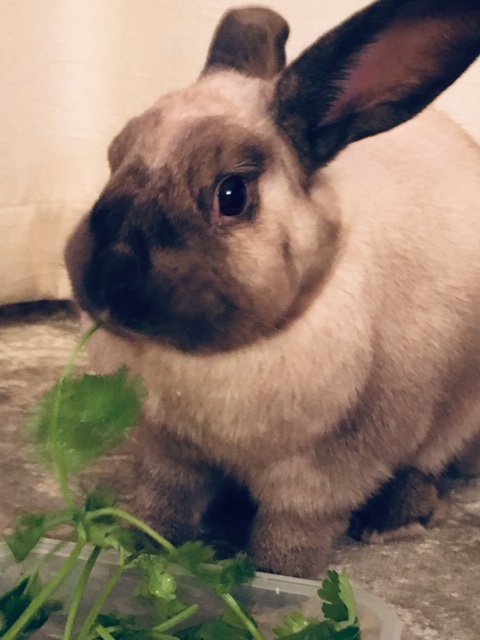 It was another Wednesday morning as I walked into the Rancho Coastal Humane Society rabbitat to do my volunteer shift. My eyes quickly focused on the new pen set up and I wondered what happened to the rabbit who was supposed to be in it! After studying the large pile of hay in the litter box, I could see a small bunny with brown markings cowering beneath. During my many years of volunteering I had never seen a rabbit acting like this. His name was now Buster and he had the lucky fortune of being found in a Los Angeles park by a kind stranger who saw a baby bunny that clearly did not belong there. My heart was heavy at the thought of someone dumping this sweet animal to fend for his life. For how many days had he been frightened to death? During two visits, I continued to be concerned for this little guy and the lack of progression getting him comfortable. I decided to foster him for two weeks to see if I could nurture his spirit.

We set up a pen in our dining room and discovered poor Buster was terrified of everything! Any item that was moved, or the appearance of a new item, and just about any noise in his vicinity scared him greatly. He gradually learned to walk on the stone floor and explore a little. He did not know how to chew or play with bunny toys. He discovered vegetables and his cautious interest grew daily. The days flashed by and the night before I had to return him to the shelter he came over to the couch, put his little front paws up on the cushion, and raised his little furry head to peer at me with big brown eyes. At that moment, I knew taking him back the following day was going to be very tough. Two weeks of discussion with my husband landed us at the decision we just had to save Buster bunny. I knew he would have a difficult time in a non-experienced home and really needed someone that could nurture him constantly.

I decided to wait several months before writing this story because I really wanted to share the journey of adopting a pet with a troubled start in life. We have fallen head over heels with this little boy, something my husband proudly and happily will admit to anyone. Buster has gone through a lot of trials during this time and he has learned to trust that the swishing of the dishwasher is safe, that the melodic tunes from the dryer end cycle are not a threat, that the overhead planes and the lawnmower are not a foe.  We have watched him bloom but it has been extremely slow. Buster earned our trust of having free roam of the house, which led to him following us up the stairs to sleep in our room every night. He happily decides to wake us as soon as dawn breaks, darting under multiple beds and up and down the stairs with a thud, thud, launching gracefully off the lowest step in a three-foot leap of joy for the day.  He then goes for a visit to his litter box and sits gazing by the patio sliding door, patiently waiting for us to let him out.  Once outside, he zips around the small yard as fast as he can, then sits for a moment to sniff the air and contemplate life.  After ten minutes of this he comes indoors to get a bunny treat, then makes a few vertical jumps of happiness, and exits outside once again. The second visit back inside includes a breakfast bowl of veggies, which he chews faster than a lawnmower before finally rushing back outside to nap under the foliage (monitored by us of course).

Buster really is the silliest and most emotional bunny I’ve ever come across. We’ve had to figure out what a lot of his moods mean and cater and coddle him like crazy newborn parents. Lots of cute moments come to mind: him playing in the curtains, figuring out chew toys are actually fun things to toss around, and his daily trick of flipping over his water bowl — to name a few. The other night I was in my robe lying on the carpet with him.  He loves my big red fuzzy robe; I believe he thinks it’s my fur and he came over to groom me. That evening he discovered my head of hair. I could see him act with joyous wonder at finding ‘fur’ on my head and he stuck his nose into it to sniff and carefully groom it as he had done with my robe. I had to laugh at the sensation of his gentle nuzzling that tickled. Buster is pretty good now at coming when he’s called, especially if it involves treats or a rustling of any kind of bag. He’s learned a few words such as “outside,” “snack,” “papaya,” and “night-night,” the latter indicating that it is bedtime. People would be amazed that rabbits are pretty smart…..and yes, crafty!

It has been ten years since my former sweet rabbit passed away and I had forgotten how much joy a bunny could bring. Buster has been a true gift in our lives. So many people are unaware of what great pets rabbits can be. They don’t make noise, are gentle souls, and can be very entertaining and loving. We have a male friend who loves to tell everyone (in his loudest New York accent),“They have a RABBIT, can you imagine THAT? It goes to the bathroom in a litter box!!!” As eyes swivel to stare at us in crazy disbelief, we just proudly smile and say, “Yes, yes we do.”