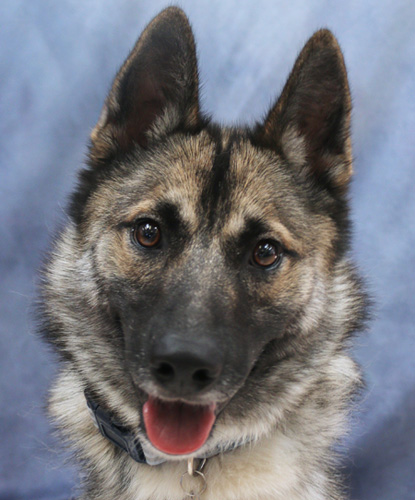 You might have seen a video on your Rancho Coastal Humane Society’s Facebook page featuring this wrestling match between Squirrel and Big Foot.

Squirrel may be fully-grown, but she’s still very much a puppy. Squirrel is a one year old, 47-pound, female, Shepherd / Husky mix.

Squirrel’s owners said she was playful at the dog park. She got along great with children and adults but, at home, she was too much for their smaller dogs. They surrendered her to one of our rescue partners in Riverside County. She was transferred to Rancho Coastal Humane Society through the Friends of County Animal Shelters (FOCAS) transport program.

Squirrel needs a home with an active family. She might like a big dog buddy to play with. (Ya know…Big Foot also needs a home. Just sayin’!) 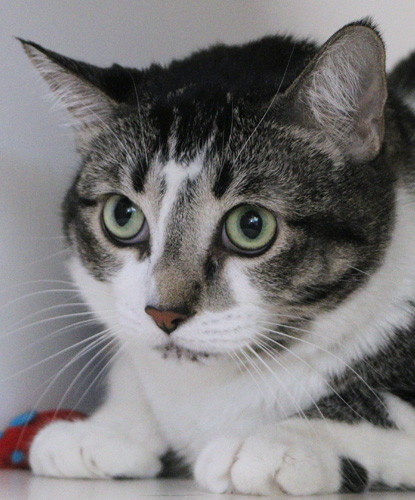 You’ve heard of the Cat in the Hat. Valentina is like a Cat and a Half. Tipping the scale at 16-1/4 pounds, she’s currently the largest guest in the cattery at your Rancho Coastal Humane Society.

We encourage adopters to have a backup plan in the event they’re no longer able to care for a pet. That’s usually a family member, friend or neighbor. In Valentina’s case, after her owner died, a lovely lady named Angela found her hiding behind the couch in the small apartment and saved her. Valentina was named after a famous explorer who was the first woman in space, and this cat’s journey is as remarkable as her namesake. Valentina traveled 333 miles to RCHS with Angela, a true animal hero, so we could find her a new loving home.

Valentina is a 6-1/2-year old, female, Domestic Short Hair cat with a grey and white tabby coat. She needs fewer treats and more exercise and play time. She’s in our Purple category. Cats in the PURPLE category are very shy and will need equally patient adopters that have experience in confidence building. Cats in the PURPLE category may also benefit from having another confident feline in the home.

Valentina is purr-fect for someone. Maybe it’s you or someone you know. Please share her story.