Sometimes Our Adoption Stories Write Themselves

Sometimes Our Adoption Stories Write Themselves 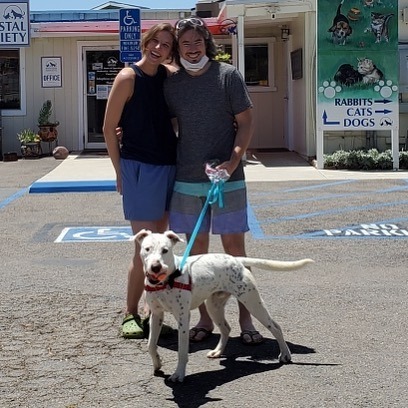 Most animal shelters would never dream of asking to have a deaf dog transferred to their kennels. That’s not the case at your Rancho Coastal Humane Society.

Was it a good idea? Ask Kira and Solomon and their new dog, a one-year-old, 56-pound male, Dalmatian/Bull Terrier mix named Silas.

Silas was transferred to RCHS through our FOCAS (Friends of County Animal Shelters) transport program. He was a stray with no history. After a few days at RCHS his file was updated to say: Staff notes that Silas is friendly, playful, vocal and pulls hard on leash.

Then the results of his first medical exam said:  Medical Level 1- goofy and tolerant, but jumpy. HE IS DEAF.

We knew he was deaf before arranging his transfer to RCHS. We had experience handling a deaf dog. Our staff and a particularly-devoted volunteer team had taught sign language commands to a deaf dog named Wanda, who had been a resident at RCHS for nearly six months before being adopted by a furever family. We expected that we could work with Silas in the same way. We continued his daily training and socialization to determine the best home for Silas.

Then it happened. He was adopted on July 14th by a couple from Palo Alto, 451 miles away! We talked with the adopters over the telephone and then held a collective breath that this could be the right match while they traveled here to meet Silas. There was just something about Silas’ story that caught Kira and Solomon’s attention, and now we had only to wait to see if Silas could capture their big hearts.

We could never tell the story of Silas any better than Kira. All we can add is this quote from dog trainer and author Karen Davison: Saving one dog will not change the world, but surely for that one dog, the world will change forever.

Your Rancho Coastal Humane Society is scheduling “Adoptions by Appointment.” Visit www.sdpets.org to see our adoptable pets and maybe meet your Silas.